The “Political Cleansing” of the Right Has Begun in Earnest

Is Gun Owners next in line to have our means of communication bulldozed?

We don’t know – which is why we are going on the offensive because we don’t want to be stuck in last place wondering what the hell we should do given this ever-changing and complicated environment we find ourselves in.   GOC must be 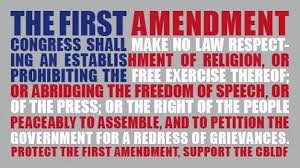 able to spread the word about what is happening with both the 2nd and 1st Amendments should the hammer come down on those of us who value free speech.

Don’t be bulldozed:  stay armed and informed and make sure you are on our email list HERE.

Already, Amazon partner GoDaddy has booted the AR15.com site from its servers.  Billed as “the world’s largest online firearm community,” they have been forced into a similar situation as Parler, who was recently given a swift kick by Amazon when they “de-hosted” the free-speech platform.

One word.  That’s all it takes these days to get drop-kicked from public life.  The cancel-culture of just a few months ago seems mild in comparison to the scorched earth movement conservatives are now experiencing.  How many of us thought we would be considered “dissidents” by voicing an alternative viewpoint – which is one of the key components of our nation’s founding?

The cancel-culture of just a few months ago seems mild in comparison to the scorched earth movement conservatives are now experiencing.

Surveys reveal that almost 60% of millennials think the 1st Amendment needs to be re-written – that it goes “too far in modern America” and that those who violate it deserve jail time!  Never mind the fact that the definition of “hate” speech changes with the direction of the PC wind.  No longer a case of threatening actual violence or harm (i.e. screaming fire in a crowded room when there is none) but if someone has the audacity to think and speak differently, get ready for the purge.

Is this a coordinated assault on the 1st Amendment?  Indeed it is.  Emboldened by a Biden presidency, the mainstream/corporate media and social media giants have gleefully joined forces in an effort to amputate the free-flow of information from conservative sites to the public.  Whether it’s Twitter-verse shutdowns, Facebook censorship or website de-hosting, this is less like a cancellation and more like a political cleansing.  We are running awfully fast and furiously toward a de facto state sanctioned media.

To that end, the Washington Post clearly thinks the founders were dull in the brain, reporting that the 1st Amendment was written in “simpler” times and thus needs some adjustment.  In contrast, University of Baltimore Professor Barry Brownstein writes, “Just as you can’t be half-pregnant, there is no such thing as government regulated free speech. If government is the arbiter of what is acceptable speech, you are on the road to a dystopian nightmare.” (Read more about this here.)  Without free speech, all speech becomes government speech.

GOC is not going to go away and although we understand the risk that comes with being bold, we shouldn’t have to make the choice between speaking the truth or facing a possible shutdown of how we communicate.  We will stand tall and firm for the fundamental concept of freedom of expression.  Remember – this is more than just an attack on gun owners and conservatives – it is a sharp rebuke of our nation as a whole and the founding principles of America.  We will not advocate for violence, but will encourage strong dialogue and vibrant activism that lets our leaders know exactly where we stand.

We don’t know if the platforms GOC uses are going to be shut down but we’d be foolish not to acknowledge it could happen without notice.  Help us stay in the front of the pack – sign up for email alerts HERE.