Like cockroaches, bad gun bills have a habit of creeping back to live among us.  It doesn’t matter how unworkable, unconstitutional or inane, the Sacramento libs won’t give up on stupid stuff like banning gun shows from public property.

SB 264 by Democrat Orange County Senator Dave Min would prohibit a state officer or employee, or operator, lessee, or licensee of any state-owned property, from contracting for, authorizing, or allowing the sale of any firearm or ammunition on state property.  In other less bureaucratic words, this is a ban on gun shows on all state properties – pure and simple. 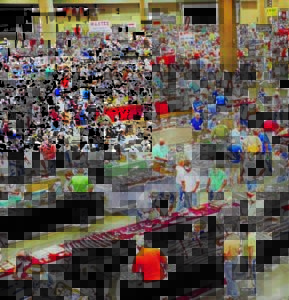 Min’s website says “The urgency for common-sense gun safety comes as new reports indicate 2020 was quietly the deadliest year in decades for gun-related deaths in the United States” and “With a record number of new gun sales in 2020, it is widely expected that gun violence will surge even more as Californians emerge from the pandemic later this year.”

Does he seriously think this all happened in some sort of vacuum? Does he seriously think the 7 million new gun owners nationally are suddently going to take to the streets and start shooting? Has he so quickly forgotten that cities all over the country experienced unprecedented increases in violent crime – which can be attributed to the pandemic, lockdown orders, to civil unrest, riots and an emboldened criminal element in the face of “defund the police” movements.  Portland, a city where the police were ordered to stand down in the face of violent riots experienced a 250% increase in shootings.  In already blood-ravaged Chicago, shootings were up 58%.  Los Angeles cut funding for police by $150 million and shootings rose by 30%  and crime ravaged Atlanta like never before.

The article Min quoted to bolster his comments indicates both the pandemic and violent riots were significant contributors to the increases, but he omitted such references.  Instead, in a chest-pounding, yet very untrue proclamation,  he said his bill will “effectively end the ‘gun show loophole’ and eliminate the sale of ghost guns, straw party sales, gun thefts from careless vendors and other unlicensed conveyances of firearms that all too often occur at gun shows.”

Min must have missed the memo from the courts (B & L Production, Inc. v. 22nd District Agricultural Association) that declared the Legislature cannot ban a legal activity on public grounds…on the grounds that it’s a violation of the 1st Amendment.

He must have also missed the memo that one of California’s premier event venues – San Francisco’s Cow Palace – has welcomed over 50 million visitors since it opened in 1941, practically without incident in 80 years.

It’s an uncomfortable fact for Min and those who share his politics that every gun show must comply with all legal mandates – every statute, all background checks, waiting periods and registration requirements.  There are zero exceptions; no yahoo can walk into a gun show empty handed and walk out with a firearm.  So much for their whiny narrative about the “gun show loophole.”  In fact, firearms purchased at gun shows account for an insignificant number used in actual gun crimes; the majority of firearms used in crimes are either stolen or secured on the black market by thieves, also known as “the bad guys.”

If we’re going to follow the Left’s reasoning on gun shows, shouldn’t we expect a ban on car shows next?  Cars are, after all, politically incorrect, unless of course they are electric and no bigger than a Mini Cooper …