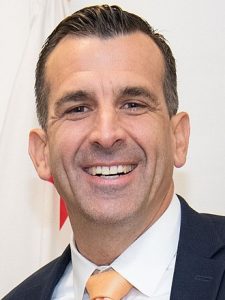 The mayor of San Jose must have the same ailment as Governor Newsom because he, too, thinks his position grants him authority far beyond his legal scope.  While Newsom has bestowed upon himself kingly emergency “COVID” powers, Mayor Sam Liccardo thinks he can singlehandedly circumvent the Constitution.  How clever of him to require all gun owners in his city to carry liability insurance!  How very progressive.

He may think he’s first at bat in trying to force this policy, but he’s not.  The idea’s been around a while and it’s not been successful for the simple reason that it’s dumb as a box of rocks.  Not only is it an unworkable scheme (impossible to underwrite) – but it’s unconstitutional as well.

Requiring someone to carry liability insurance for participating in a Constitutionally guaranteed right such as the 2nd Amendment is no different than steamrolling the 1st Amendment by mandating the media carry such insurance.  At times, does not the written word result in extraordinary damages? Hasn’t the media fanned the flame of violence, leading to loss of livelihoods, property and yes, even lives?  Yet, to require the media to carry liability insurance is patently absurd – just as it would be for requiring the same of the ordinary American citizen who owns a gun or two.  Even though much of what the media turns out these days is nothing short of garbage, they are justly covered by our Constitution. This is one of the key reasons America is America and what differentiates us from the rest of the world – we have enumerated rights that are protected – fake news or otherwise.

In an op ed piece in the Wall Street Journal, David B. Rivkin Jr. And Andrew M. Grossman get right to the heart of this particular matter:

Several states… are considering gun-insurance mandates modeled after those for automobile insurance. There is no conceivable public-safety benefit: Insurance policies cover accidents, not intentional crimes, and criminals with illegal guns will just evade the requirement. The real purpose is to make guns less affordable for law-abiding citizens and thereby reduce private gun ownership. Identical constitutionally suspect logic explains proposals to tax the sale of bullets at excessive rates.

The courts, however, are no more likely to allow government to undermine the Second Amendment than to undermine the First. A state cannot circumvent the right to a free press by requiring that an unfriendly newspaper carry millions in libel insurance or pay a thousand-dollar tax on barrels of ink—the real motive, in either case, would be transparent and the regulation struck down. How could the result be any different for the right to keep and bear arms?

To further prove our point, we have a preemption law in California which expressly prohibits local jurisdictions from passing their own gun laws.  This has prevented a patchwork of local ordinances that could place law abiding gun owners in conflict when doing something as simple as crossing from one city into another.

We doubt that Mayor Liccardo will wake up some bright San Jose morning and decide he’s barking up the wrong tree.  We doubt as well that members of the City Council will do the same – which means this will initiate some sort of legal action that will not only be costly to the gun rights community, but to the good people of San Jose as well.  The taxpayers don’t deserve this – and most certainly, the law-abiding gun owners in San Jose should not bear the financial burden that results from criminal deeds.