How many reasons do we need to send Governor Newsom packing?  There are almost too many to list, but the bottom line is, we need to make the stain on his political career permanent.

As the oldest pro-gun political action committee in the nation, GOC has been laser-focused on the Left’s calculated, relentless, and fraudul 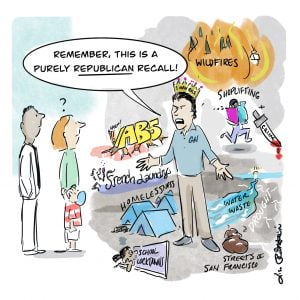 ent campaign against honest gun owners, and Gavin Newsom has been leading the charge for the past 10 years.  It’s hard to pinpoint who exactly Newsom cares about because safe communities and victims of crime are certainly low on his list of priorities.  He’d rather wage war on the law abiding’s right to protect their homes and families because he hates guns more than the criminal who uses them.  He’s fixated on the great evils of groups like GOC – going so far as to say the gun lobby is “willing to sacrifice the lives of our children to line their pockets.”

His lack of concern for the safety of Californians was evidenced this week when he issued a sharp slap in the face to the family of Michael Morganti, a developmentally disabled man who was forced to dig his own grave before he was buried alive by David Weidert.  Newsom supports Weidert’s release from his life entence even though Morganti was beaten with a baseball bat and a shovel, stabbed with a knife, choked with a telephone wire before being dumped alive into a pit. Newsom had the chance to step in and stop the state parole board’s decision to grant Weidert’s release but he didn’t,  stating instead that this convicted killer “does not pose a current unreasonable risk to public safety.”

Public safety.  This is the last thing on Newsom’s agenda.  If this were the case, he would never have amped up early release credits for 76,000 inmates, more than 63,000 of which were convicted of violent crimes.  They are now eligible for good behavior credits that shorten their sentences by one-third instead.

Newsom’s reckless policies are inextricably linked to the 31% increase in California’s homicides last year – the deadliest since 2007, according to statistics released from the Department of Justice. Yet Newsom is too arrogant to admit his failures, instead making the claim that increased legal gun sales are the reason for the crime wave.

Los Angeles Police Protective League vice president Sgt. Jerretta Sandoz was spot-on recently, when she sharply rebuked Gov. Gavin Newsom for denying a statewide rise in crime,  charging (justifiably so) that Newsom was living in a “fantasy world” and that the crime data and numbers are very clear:

“That’s a fantasy world. Where are we living in? I mean, you could look at the numbers throughout California and the rest of the country. Crime is increasing. It is surging, and there’s no consequences. There’s no repercussions for these criminals that feel that they could go in and do what they want. And it’s because of these laws. That statement is not true. The numbers don’t lie.”

What exactly does Newsom want?  Safer streets?  No, because if that were the case, his early release and commutations would have been round-filed.  Does he want Californians to be prepared in the face of a crime surge?  No, because he continues to push for the disarming of Californians, touting his gun control “successes” as the premier architect of Proposition 63.

Neither does Newsom give a hill of beans about the thousands of California business owners whom he bankrupted with his COVID shutdown – nor their hundreds of thousands of employees who suddenly found themselves locked at home in a virtual unemployment line.

And about those hundreds of thousands of jobless residents:  their unemployment claims were backlogged for months on end – yet the Employment Development Department managed to pay out a whopping estimated $31 billion in fraudulent claims, including $1 billion to prison and jail inmates. That’s a lot of angry folks clamoring for money desperately needed to stay afloat.

No doubt about it, Gavin Newsom is a bad manager. On his watch, not only has crime exploded, but homeless encampments continue to overwhelm our cities.  And what do bad managers do?  They seize more control.  In one of the most tyrannical aspects of his leadership, even as he declared COVID under control, he has refused to let go of the iron-fisted “State of Emergency” that has given him extraordinary powers for over a year.

With all that power at his fingertips, why has it not been more efficiently directed at addressing the worst fire season California has faced in decades?  With fires raging throughout the state, why isn’t the media paying more attention to the reports that Newsom misled the public on the state’s wildfire prevention efforts?  As the Dixie Fire moves into a devastating week four, where’s the conversation about the investigation that found Newsom had overstated “by an astounding 690%, the number of acres treated with fuel breaks and prescribed burns in the very forestry projects he said needed to be prioritized to protect the state’s most vulnerable communities,” which was reported by CapRadio’s Scott Rodd. “Newsom has claimed that 35 ‘priority projects’ carried out as a result of his executive order resulted in fire prevention work on 90,000 acres. But the state’s own data show the actual number is 11,399.”

This is more than enough to give Newsom a swift kick in the fanny out the door – and we haven’e even addressed the gas tax.  But his political cronies will be providing a lot of positive fluff to dissuade Californians from supporting the recall on September 14.  Don’t be fooled:  VOTE YES ON THE RECALL.   The thought of this guy getting any closer to the White House is staggering, and he must be derailed now.