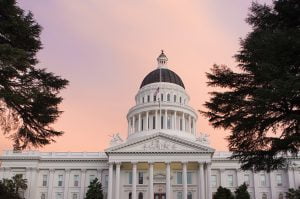 We have good news in the face of an extended stream of bad news: The Legislature has left the Capitol.

On September 10, the Senate and Assembly wrapped things up for the first half of the 2021-22 session, said adios, left their damage on Governor Newsom’s desk and headed home to their districts. They will return in January 2022.

At the beginning of the year, GOC was tracking no less than 20 bills – some absolutely awful, some moderately bad and some pretty innocuous – but the devil is in the details which is why we must watch things carefully as bills move through the process.  The worst proposal was Bay Area Democrat Assemblyman Marc Levine’s AB 1223, which would have slapped a steep excise tax on the sale of every gun and box of ammunition sold in the state.  We pushed back hard on this one, and because it needed a 2/3 vote for passage, Levine had his work cut out for him.  Ultimately – even though he used a technical maneuver to side-step a deadline, he was unable to muster the votes to get if off the Assembly Floor – it languished on the Inactive File for weeks, and will still be there when the politicians return in January.  This was a victory – and we are hoping it will not be short lived.

And then there’s the mysterious and shifty tale of a Budget “Trailer Bill,” which basically directs the state how to spend all the budget money. But why bore anyone with these details?

Because it ceases to be boring when it smacks gun owners.  Our legislative leaders took language from AB 1273 (Ting-D), a bad bill that was stuck in the process and slipped it into AB 173, a “trailer bill” – which means it bypassed a slew of public hearings and deadlines.  This was an irregular and shifty maneuver by any account, (click HERE to read more on the Legislature’s sneaky “trailer” bill tactics) but this impacts the privacy rights of gun owners.  AB 173 “clarifies” what “specified” (read: confidential) information DOJ can disclose to the California Firearm Violence Research Center at UC Davis for “research or statistical activities.” Now, the DOJ may, at its discretion, disclose confidential information to other nonprofit “bona fide” research institutions that are accredited by the United State Department of Education.

By granting DOJ the authority to cherry pick to whom they provide data is prejudicial and undermines the entire concept of “research.”

The following also landed on Newsom’s desk, both of which were significantly watered down – neither one are good, but they are a heck of a lot better than when they were introduced.

SB 264 – Min (D) This bill originally prohibited gun shows (the sale of firearms, ammo or pre-cursor parts) on any state or county property.  It was then amended to county properties, and finally, was amended to only ban shows in Orange County. Regardless, it remains an unfortunate attempt to needlessly cripple gun shows who have operated in the state practically without incident for over 50 years.  Show promoters have vowed to fight this – even though the bill will likely be signed by the Governor.

SB 715 – Portantino (D) This bill started as a mess and it ended up as a mess – albeit a lesser mess.  The bill continues to convolute the issue of hunting license exceptions for adults age 18-21 when purchasing a long gun and the loaning provisions to minors. All the “specified exemptions” will make the law difficult to navigate, so we have our work cut out for us as we watch how the Department of Justice will administer the new statute.

So there you have it.  We aren’t “pie in the sky” here at GOC and have no illusions about what Governor Newsom will do.  All in all, three bad bills are much better than what we’ve faced in previous years.  Rest assured we will be ready to go once the Assembly and Senate return in January for the second half of the 2021-22 legislative session.