Gavin Newsom has never met a gun control idea he didn’t like.

Nor has he ever missed an opportunity to exploit some tragedy for political game – especially when it comes to guns.  That’s just who the guy is.

Thus, we are hardly surprised that at this writing, he has signed two of the three anti-gun bills on his desk – even though one of the three got there under re 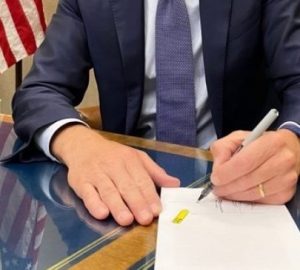 latively unorthodox means.  But then again – we doubt there is much “unorthodox” about anything the Left does.  It’s all part of their playbook.

To reiterate what we’ve said before, GOC is pretty glad that only three of a host of bad bills even made it to the Governor’s desk. Plus, Assemblyman Levine’s scheme to smack us with a fat excise tax on both guns and ammo (AB 1223)  failed for this year, and we consider this a solid win for our team.

To date, the Governor signed the following:

SB 715 – Portantino (D) We are thankful for small favors – this bill started out as a mess and it ended up as a mess – albeit a far lesser mess than when it was introduced.  As signed, the bill convolutes certain hunting license exceptions for adults aged 18-21 when a long gun is purchased and also clutters up the loaning of guns to minors. We are going to watch how the Department of Justice is going to navigate all the “specified exemptions.”

The shifty maneuver with a budget trailer bill proved successful for the gun-control politicians because Newsom signed AB 173, what we consider to be the worst of the three bills before him. Put simply, it tosses gun owners confidentiality out with the trash, as the bill “clarifies” what information DOJ can disclose to the California Firearm Violence Research Center at UC Davis for “research or statistical activities.” With this new statute, the DOJ may, at its discretion, disclose confidential information to other nonprofit “bona fide” research institutions that are accredited by the United State Department of Education.

By granting DOJ the authority to cherry pick to whom they provide data is prejudicial and undermines the entire concept of “research.”  GOC has never been opposed to research conducted on the use and misuse of firearms. There is reasonable concern however, especially given the complexities and controversies of firearm use and misuse.  There are wide differences of opinion, observations and analysis by noted academic scholars even when researching the same set of data.  That said, we have strongly opposed this policy in previous bills that never garnered the necessary votes for passage.

To date, no action has been taken by the Governor on SB 264 – Min (D) which originally prohibited gun shows (the sale of firearms, ammo or pre-cursor parts) on any state or county property.  It was then amended to just “county” properties, and finally, was amended to only ban shows in Orange County. Regardless, it remains an unfortunate attempt to needlessly cripple gun shows who have operated in the state practically without incident for over 50 years.  Show promoters have vowed to fight this – at this point, we are uncertain whether they will challenge this in the courts should Newsom sign the bill.

NOTE:  GOC has recently contracted with a new legislative tracking service; rest assured it will be up and running well before the Legislature returns to Sacramento in January.  We are excited about this new feature as it will provide members of the pro-2nd Amendment community more access to more data and the ability to communicate with their elected representatives with a simple click.  More to come on this in the coming months so stay tuned – and above all, STAY ARMED AND INFORMED with GOC!