So, what can we expect when the anti-gun bills are heard next week in the Assembly Public Safety Committee?  Under normal circumstances, things are always rough for supporters of the 2nd Amendment, so GOC has no illusion that things will be any different when we arrive to testify in opposition to AB 2362/Muratsuchi (firearm dealer penalties) and AB 2847/Chiu (microstamping)

If we are allowed to testify – and that’s a big “if” at this point, will it be in person?  Might it be from a remote location, or via telep 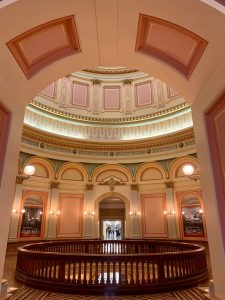 hone, given that the Capitol is currently closed to the public due to COVID-19? Yes, committee hearings have resumed but there are strict guidelines, however, for testimony and public input.  The limitations are unclear at this time.

If last week’s Education Committee is any indication, it may go something like this:

Given the obvious constraints of hearing bills during a pandemic, it’s easy to understand what a total cluster legislative testimony could become.  The Education Committee was a disaster to such a degree that Politico called it an “IT Department’s nightmare.”

They reported that “Callers failed to mute their lines, disrupting lawmakers at the dais. The opposition call-in line got confused with the support line. People talked over each other. Feedback echoed. Many times during the public comment period, masked committee members sat in silence as the phone moderator struggled with an outside vendor to connect anyone on the other side.”

One legislator questioned whether there was “another spirit” in the committee and they ultimately had to recess in order to “work on some technology issues.”

The big question is, have these issues been handled? Will the public be able to weigh in on legislation? Will legislators be able to question witnesses and will the public be able to listen?  Will follow-up questions be permitted?  Will procedural shenanigans raise their ugly heads and will legislative rules be tossed like a carton of spoiled milk? Most importantly – will bad bills be pushed through because of frustration with some logistical obstacles?  The Education Committee’s buzz-saw was due to a single controversial bill, and there have been reports that other committees have been able to conduct business within current limitations, which is a good thing.  That said, the bills assigned to Public Safety are often very  contentious and controversial by their very nature, which is why we are hoping for the best but preparing for the worst.

It goes without saying that every single legislator (yes, every single one of them, regardless of party affiliation) believes their bills are the most important and thus deserve to be heard.  This does not, however, make it so.  One of the most dire consequences of COVID-19 is the financial hit the state is taking – NOTHING should be considered that would strain one iota of our existing financial resources.  No additional regulations, no restrictions on our liberties, and certainly NO GUN CONTROL.

Wouldn’t it be nice if the legislative leadership stepped off their prideful podiums and limited their efforts to stimulating the economy rather than figuring out ways to break it?  AB 2362 is a perfect example; this is the worst time ever to grant the Department of Justice additional responsibilities to do anything – let alone penalize firearm dealers – especially since DOJ has been lax in addressing their own existing operational problems.  Read GOC’s news piece on AB 2362 and AB 2847 here.